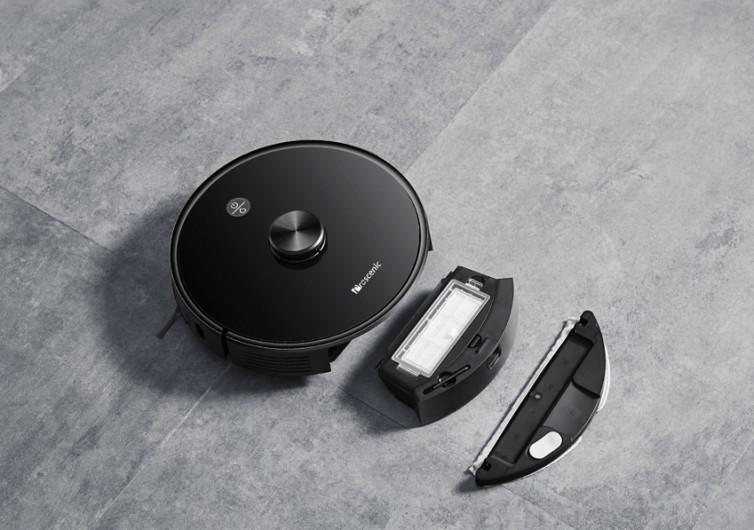 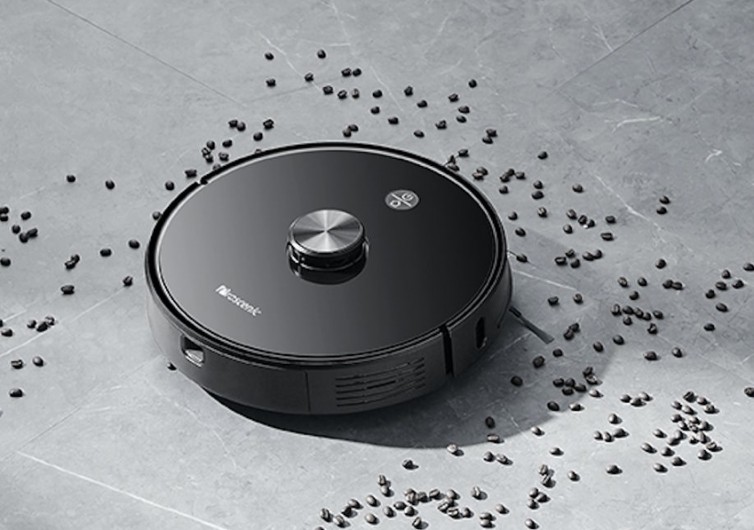 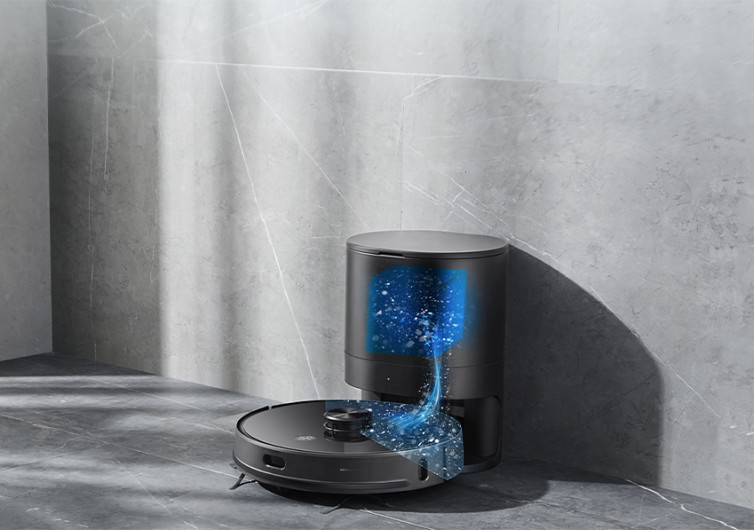 By Seiji Ishii
Last Updated January 25, 2021
Seiji Ishii
Seiji is Editor in Chief at Gear Hungry. He has enjoyed a lifetime of outdoor adventure and sports, from participant and competitor to coach and trainer, and finally as an editorial contributor. His interests have spanned cycling, climbing, motorcycling, backpacking, trail running, and the training involved for all of it. He has also designed outdoor and off-road motorcycling gear. He lives in a wildlife refuge in Wimberley, Texas, with his daughter, itinerant dirtbags, a dog, and a cat.
Learn about The Gearhungry's Editorial Process
GearHungry may earn a small commission from affiliate links in this article. Learn more

Laser Navigation, Superpower Suction – The M7 Pro Robotic Vacuum is at Your Service

The robotic vacuum cleaner, or “robovac,” first entered households in the late ’90s, but the available technology kept it from gaining domestic traction. But in 2002, iRobot released the Roomba, which went around objects, detected dirty areas, and avoided drops. The Roomba rose to popularity quickly, and other technology brands followed in its wake, releasing a flurry of iterations. Many robovacs today boast numerous innovations, from mopping to laser guidance, as seen in the new Proscenic M7 Pro LDS robotic vacuum.

The Proscenic M7 Pro LDS Vacuum Cleaner (MSRP $499) launched in October of last year, and it has been doing duty in my country home since. An outdoors obsessed 7-year-old daughter and a constantly shedding dog and cat have tested the laser-guided M7 Pro robotic vacuum’s mettle as it made the rounds in my tile and wooden-floored abode, with plenty of rugs, furniture, and scattered toys to add to the challenge.

Twenty-four lasers with 360 degrees of coverage adorn much of the surface area of the vacuum, with some peeking out from a turret atop the 13.5-inch diameter, 3.5-inch-tall unit. These lasers allow the Proscenic M7 Pro robotic vacuum to learn the shape of your house, the location of obstacles, and to avoid drop-offs. The laser guidance system also creates a map and optimal path to ensure the entire floor gets cleaned. This navigation system works in conjunction with the ProscenicHome app to store multiple maps to accommodate more than one cleaning area or multiple floors for multi-level houses.

The laser guidance system integrates with the vacuum’s forward-facing bump sensor to avoid both permanent and temporary obstacles.

The M7 Pro robotic vacuum connects to the home’s WiFi network, giving you control via the ProscenicHome app (Android and iOS) or Amazon Alexa. Proscenic includes a remote as well.

The app creates cleaning schedules, switches cleaning modes, and allows “fencing off” areas on the generated floor map for the robot vacuum to avoid. It also creates a record of each cleaning session, logging every conceivable metric along with a map that shows the exact cleaning path.

There is only one medium pile area rug in my home; otherwise, it’s all wood floors or tile, making easy work for most vacuums. But I live a few miles down a dirt road in the woods, with a cat, dog, and 7-year-old daughter, and we mostly live outdoors. That means numerous transitions between the dirt, grass, and dead leaves right outside the doors to the inside of the house all day long.

To add to the mayhem, the German Shepard and Russian Blue cat both shed all year long. And, admittedly, I am somewhat of a dirtbag. All this translates to a floor that may not require the ultimate suction, but it does require frequent cleaning.

The 2700 Pa of suction power, dual forward-mounted rotary brushes, and center roller brush easily nabbed dirt and pet hair off the tile and wood flooring, doing an excellent job on the edges and corners. But on the area rug, in areas of high dog hair concentration, the M7 Pro robotic vacuum struggled, even with the automatic boost in power triggered by carpet. I didn’t think it was a suction issue, I thought it was the lack of pressure on the roller brush, as there wasn’t the additional force applied by a human operator and the M7 Pro only weighs 11 pounds.

The mopping function was a non-starter for me. The water tank was only 110 ml; the mophead’s limited surface area and its low amount of absorbency didn’t impress. It got the floor wet and picked up loose dust, but that was it. And the robotic vacuum would continue to mop over the carpet without eliminating that area through the app.

Although the Proscenic M7 Pro robotic vacuum had no issues hopping onto and off the area rug, cables and certain commonplace obstacles tripped it up, causing the M7 to ask for help verbally. A little site prep fixed most of these issues; tying up cables, getting sheets and other fabric items off the floor (a single sock would stop it dead) lead to smooth sailing. The only thing that couldn’t be rectified was the tripod legs of the drum cymbal. The M7 had enough maneuverability to crawl up these low angle legs, only to get high-centered as it jammed against a wall. The solution was to draw a perimeter around the drum kit in the app as a “no-go” zone (you can specify up to 10 such zones).

The other significant limitation in my home was the 600-ml dust bin capacity. If the dog were shedding a lot, the bin would get overstuffed, and although the M7 would continue its mission, it failed to pick up more debris. I learned to empty the bin after a room was complete when the shedding was severe. But even when the dust bin was overstuffed, I could tell the HEPA filter was still keeping the dust from being exhausted out of the vac.

The 5200 mAh lithium-ion battery-powered the unit for about 100 minutes on “standard” mode (vs. “power” mode). After that time, the vacuum returned to the low-profile home base for a  recharge. This limiter meant that cleaning my entire 180-square-foot house on a single charge was not possible, as it took roughly an hour for every 600 square feet. When the docking station repleted the battery, the vacuum would resume where it left off before the 4.5-hour recharge time.

But it’s possible to schedule a cleaning of different areas on separate sessions or days, which worked well for my situation and calendar. Dividing my home into three sections, roughly 600 square feet each, resulted in the robotic vacuum never needing a full battery to power each job.

For me, the best way to use the Proscenic M7 Pro LDS Robotic Vacuum Cleaner was as a consistent “maintenance” tool. If I scheduled cleaning a section every day, the house would never become so dirty that the vacuum’s cleaning ability or dust bin capacity got overwhelmed.

Occasionally — either the day after a rain, when all forms of life dragged dried mud into the house, or when I had a bunch of dirtbag friends over — I would have to bust out the heavy artillery (a standard vacuum) for the area rug. But 95% of the time, the M7 Pro always had my floors presentable.

And isn’t that the best use of a robot? To do the mundane, repetitive tasks, consistently and behind the scenes? When used in this manner, the M7 Pro robotic vacuum was a valuable member of the home team.

You Name It, They Clean It: The Best Wet Dry Vacuums Of 2022

by GearHungry Staff
Last updated: May 20, 2020
Sign Up Now
GET THE VERY BEST OF GEARHUNGRY STRAIGHT TO YOUR INBOX