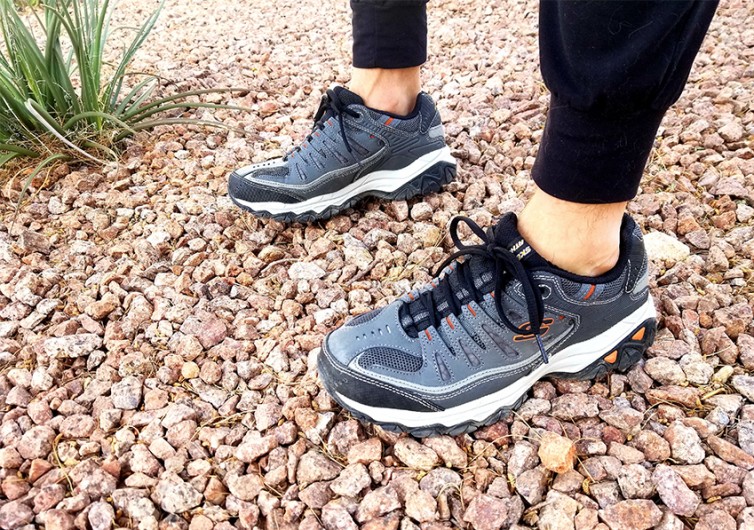 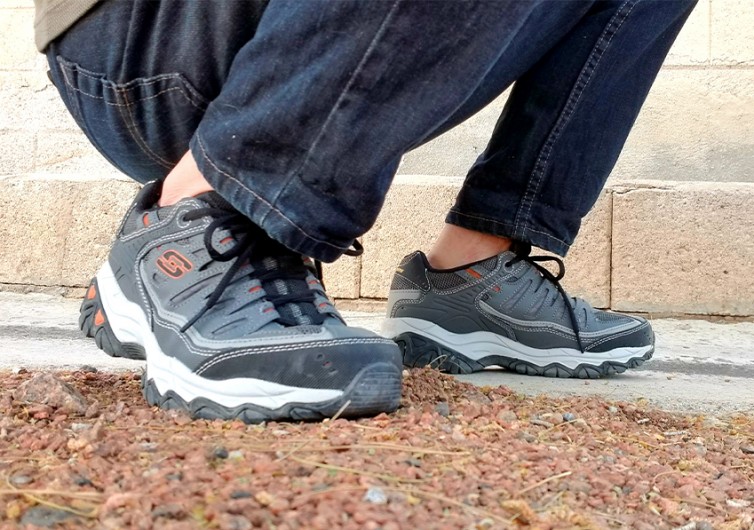 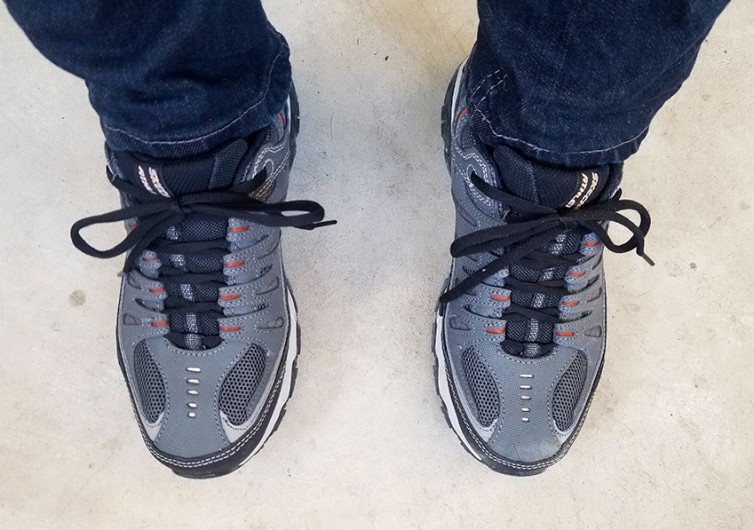 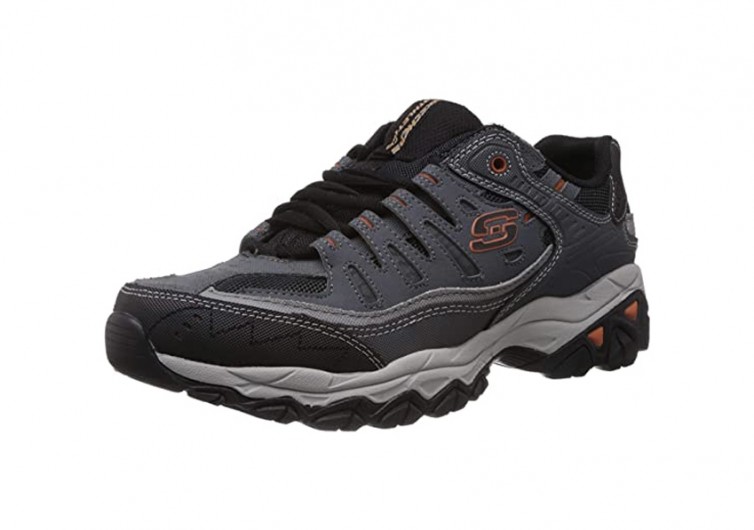 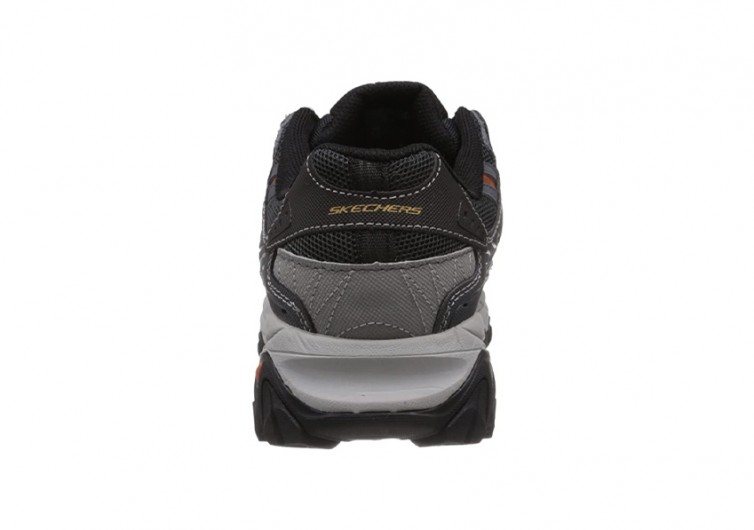 By Sam Anderson
Last Updated April 12, 2021
Sam Anderson
Sam Anderson has followed a passion for well-told stories and nature's beauty from university classrooms to mountain adventures. After earning a bachelor's degree in literature, he leaned into a life fueled by road tripping, rock climbing, coffee and beer, and renegade camping. He has worked as a chainsaw operator, house carpenter, and window cleaner, at one point running his own window cleaning business. He has finally settled with his girlfriend and small zoo in the western American desert, trading his tool belt for a keyboard.
Learn about The Gearhungry's Editorial Process
GearHungry may earn a small commission from affiliate links in this article. Learn more

For me, testing the Skechers After Burn men’s walking shoe was an exercise (no pun intended) in podiatric experimentation. I came into the test with zero prior experience in memory foam insoles, and I hadn’t worn a pair of Skechers in…uhhh…?

You get the point. But I thought the After Burn’s rugged profile, sturdy upper, and aggressive tread could help me in my life of desert hiking and off-road dog walking, and the $68 MSRP looked a lot more agreeable than many of the triple-digit prices fetched by high-tech hiking shoes, so I took a chance.

Long story short, I won’t be retaking it. Here’s why.

The Skechers After Burn walking shoe features a sturdy synthetic upper (the shoe is also available in leather) with mesh insets. The collar and heel cut a high profile, and in my experience, they were noticeably rigid. A synthetic cap helps protect the toe.

The After Burn’s sole is tall (Skechers measures 1.5”), with moderate lugs and flex grooves on the outsole. The toe has a moderately-sized cap. The midsole features Skechers’ Articu-Lite technology for lightweight support.

This brings us to the After Burn’s central feature and the main point of differentiation: the memory foam insole. The cushy insole, constructed of the famous space-age material, is glued into the shoe’s footbed.

As Tested: Feeling the After Burn

The After Burn’s memory foam insole was distracting and non-helpful. I’ll admit I was skeptical at first. Memory foam seemed like an odd choice for a shoe part that’s meant to contour to your foot’s shape and support your weight over time, but I figured over 30,000 positive Amazon reviews couldn’t all be wrong. Surely, memory foam was a functional insole material.

Instead, it wasn’t. I put the After Burn to the test over a three-week period with various dog walks and a few shorter (two miles or less) hikes. I wanted to give the After Burn a longer testing period; unfortunately, I didn’t want to wear them anymore.

The After Burn’s memory foam insole (shocker alert) did exactly the same thing as a memory foam mattress: it squished into whatever shape my weight forced it into, then bounced back when I took my weight off it. Simple.

Part of me couldn’t believe this was it. I thought, There’s no secret? It doesn’t break in? Nope, it doesn’t. It just keeps randomly squishing according to each tiny inconsistency in your footstrike, mile after mile, while you walk on what feels like a ziplock bag filled with peanut butter. Alas, I couldn’t take it out and replace it: it’s integral to the shoe’s build, glued resolutely to the footbed.

To compound my frustration, the shoe performed pretty well otherwise. I liked the overall fit: the toe box felt roomy but not cavernous. I have narrow feet, and too-wide shoes are a common problem (the After Burn is also available in extra-wide). Its tread performed reasonably well on moderate grades with loose gravel. Its sole was thick and cushioned enough that I never noticed stepping on random rocks, etc. And the synthetic, toe-capped upper proved tough against abrasion from low-hanging branches on the trail.

For those who like memory foam insoles (and I know you’re out there, all 30,000+ of you), the Skechers After Burn is a great choice as a men’s walking shoe. Its terrain versatility, resilient materials, and supportive ankle area make it great for moderate-duty trail outings or casual walkabouts.

Best Running Shoes For Kids In 2022

by GearHungry Staff
Last updated: January 29, 2019
Sign Up Now
GET THE VERY BEST OF GEARHUNGRY STRAIGHT TO YOUR INBOX