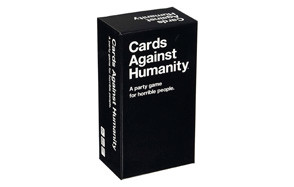 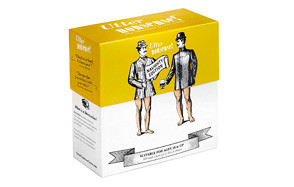 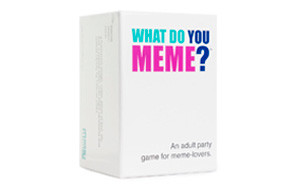 What Do You Meme? Adult Card Game

Party games sure have evolved since way back when, haven’t they. Even back when our parents entertained their bosses, old friends, and the neighborhood, they preferred the (mostly) wholesomeness of Pictionary, Charades, and perhaps one of the many, many games possible with playing cards, although we’re sure they never touched Presidents. These games are old hat (almost as old hat as that phrase), and now card game creators have ushered in a new generation of offensive (in the best way), crass (in the best way), and generally disgraceful (in the best way) games that rely on just how depraved everyone can be. Who says we’re devolving as a species? If you’re planning a proper adult party complete with all the cursing, sickening shouts, and distasteful nonsense, then check out our list of the best adult card games. For our younger readers, we shouldn’t need to say that these are recommended for ages 18 and above, but if you think the kids are mature enough, we won’t tell anybody, wink wink.

The grand daddy of adult card games, Against Humanity is probably the one that you all associate with every boozy, night that got out of hand, and even after it’s ten or so years of being brought out at every college party, every bar, and shocking unwitting grandparents over Christmas, it’s still the go-to adult card game for anyone who loves to embrace their inner bastard.

Really, it needs no introduction, but if you’re one of just four people across the world who’ve never played it before, the rules are simple. One person picks a black card, typically the start of a sentence, and the rest of the players fill in the blanks in the most awful way possible. Whoever has the most black cards at the end is the winner (if you can call it that).

Suitable for endless hours of disgusting fun, you’re sure to get to know how everybody thinks after a couple of rounds. Our handy guide to the best poker sets features more great products like this.

Both sensible and preposterous rules included

2
What Do You Meme? Adult Card Game

Created by the same guys who run an Instagram account (among other things), What Do You Meme? is an adult card game for lovers of the internet’s most treasured spawn. If you’ve ever wanted to go viral, here is your chance, among family and friends at least, as you compete to create the most bellyaching, and perhaps surreal meme you possibly can.

Those who spend more time on the internet than socializing may have the advantage, but sometimes those who’ve never gotten close to a meme before might just strike gold. It might sound stupid (most adult games are) but that’s part of the fun. Take the chance to become internet famous, and show off your previously shunnable knowledge in a blaze of glory. This also makes a perfect white elephant gift for your loved ones.

Up to 90 minutes of playtime per round

3
WTF Did You Say? An Adult Card Game Against All Dignity and Morality

If self-deprecation is your thing then you’ll love WTF Did You Say? almost as much as you hate yourself. This card game comes with a massive set of nearly 600 cards, each one worse than the other, which guarantees hours of fun (if you can call it that), and unlimited replay value.

With simple directions and even the ability to create your own cards, you and the gang will cringe and cry as your darkest thoughts are laid bare. If you like Cards Against Humanity, but feel it might have run its course with you and your buddies this is a game that gives you something a little different once you can predict every single answer that comes up. Be sure to also check out our list of the best board games for more great items like this.

If a game states on the box that it should be banned, you know before you even lay the first card down that it’ll be a winner. Disturbed Friends contains 250 disturbing questions and 100 cartoon winning cards that show your friends just what you think of them.

By selecting scenarios, you can pick and choose how your buddies will react in the worst situations, while the rest predict just how accurate these eventualities seem. Excellent for long-time friends, and maybe even better with people you’re just getting to know, you’ll be disturbed beyond belief but also thoroughly entertained. You may also be interested in some of these fun solo games from our list, so check them out.

Ideal for those with a disgusting sense of humor

The chance to understand just how wrong your mind is, yay!

We’ve all been there at some point in our lives and some of you may have just been all three at once (tsk, tsk). DRUNK STONED OR STUPID is both exactly like it sounds, but also not at all like it sounds. A modern, degenerate version of Most Likely To…, the more players the better as you lay your feelings about your friends bare for all to see.

It’s not a game for those who have thin skin, but it will be a hit for any group who love to laugh at themselves as much as they do at each other. Using a voting system, everybody gets to see just what each other thinks of you, all the while plotting their revenge in the best way possible.

The more players the better!

Enough weird and wonderful situations to fit everybody

Those who watched the The Office and cringed at its hapless Regional Manager Michael Scott will recognize this game’s namesake (though we’re sure it existed in the playground long before that, but whatever), and this game gives you the chance to twist and turn every little phrase into the innuendo it deserves.

To do this, you need to get your brain into the weirdest gear possible and find the joke in any phrase you can. Find the perfect setup to your cleverest phrases and split the sides of everyone in attendance. Great for party nights, or just when you feel like unleashing your dirty side, That’s What She Said is sure to get you going. Wait a minute…

Up to one hour of gametime

As dirty as your mind wants to be

If you’ve ever played Would You Rather but always struggled to come up with ideas on the spot then this is the game for you. Bringing the decision making classic and transforming it into a card game, Pick Your Poison is the perfect way to discover just how messed up some of your friends and family really are.

Containing all sorts of unbelievable questions, you can play this game for hours on end, which is plenty of time to start planning who your new friends will be, and everyone else will be doing the same about you. Love games? Check out our review of the best family board games for our top picks.

Anonymously pick your poison and then get publicly shamed

Can be combined with the Regular Edition

Does getting smarter sound good to you? Does swearing at your friends while you get smarter sound even better? We thought so. F**k. The Game, is an original party game birthed way down under in Australia that has taken the world by storm. It’s designed to mess with your head as well as everyone else’s so be prepared for some psychological damage.

The cards are pocket-sized, so you can play it anywhere you like, perhaps against your better judgement, and claw as many unfortunate souls as you can into its grasp. At least you’ll have friends beside you in Hell.

9
The Voting Game – The Adult Card Game About Your Friends

From the same people that brought you Pick your Poison, The Voting Game is designed to destroy even the strongest friendships, and leave everyone watching cackling in sadistic glee. Throughout, you can share personal stories, learn more about each other, and eventually decide to never speak of the night or to each other ever again.

Players take turns in positing questions to the group and everybody else votes on who suits the answer the best. It sounds tame, but things soon descend in depravity when things get just a little too personal. Lots of replayability, which is handy considering you’ll need a new group of friends after each game. All in all, it’s a nice round of wholesome fun for everybody. Don’t forget to also check our guide to the best puzzles for adults, for more great products like this.

Up to 60 minutes of game time

10
Circle Of Jerks – The Adult Card Game For Inappropriate Adults

Hilariously titled and hilariously created, Circle of Jerks is faced-paced and raunchy for those who love the thrill of competition mixed in with degrading yourself and everyone around you. You need to shout, scream, yell, and drop as you race to match cards with whatever’s poisoning your ears before anybody else.

If you feel like your quiet Sunday afternoons could do with a little more flavor, this is the game for you. Suitable for up to 8 players, it is sure to give you an outlet to release all of your frustration in an acceptable and encouraged way.

Last but not least, Utter Nonsense Naughty Edition is an adult card game that allows you to drag out your long forgotten repertoire of offensive impressions without fear of getting accused of hate crimes. Using stupid accents and even stupider sayings, you’ll be required to create things on the fly for everyone’s entertainment.

It sounds easy enough, but sometimes the results are total gibberish, or utter nonsense, we suppose. Everyone’s gotten far too sensitive, so it’s nice to have a safe space to act as terribly as you like. Just maybe don’t do it in public, unless you enjoy inciting angry mobs. Pitchforks at the ready, everybody. Find more great products like this by checking out our guide to the best solo board games.

Over 500 cards to combine

Contains an array of different accents and phrases

Over 30 minutes of playtime

12
These Cards Will Get You Drunk

Every group of friends has their favorite drinking games (well, most do). But, after years of playing the same games, it’s always good to find a fresh new way to get you on your way. This card game – called These Cards Will Get You Drunk – is one of our favorite ways to enjoy a few drinks with friends. You can use any drink you want really – beer, wine, shots – but it’s always a good idea to pick something with a low alcohol percentage, so you don’t end up doing something stupid.

The game features 100 unique cards that players pick up and then follow the instructions. For example, you might have to imitate another player and the first person to guess who you’re imitating picks someone to drink. It’s super easy to learn and play, so you won’t have to spend hours reading the instructions. Just remember to drink responsibly.

Works with any drink

Easy to learn and play