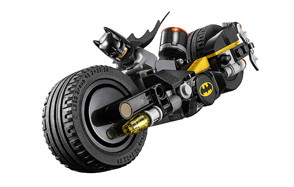 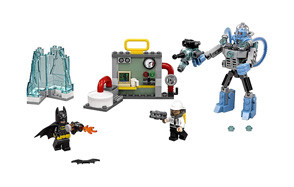 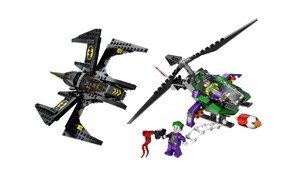 This product guide was written by Jordan Carter
Published 10:24 am
Contents

Na, na, na, na, na, na, na, na, na, na, na, na, na – Batman! If fighting off villains and eradicating crime is your thing, set yourself up with one of these super cool Lego Batman sets. Guaranteeing hours of fun as you build your model and then engage in some action-packed fantasy play, these Batman Lego toys are the ultimate creative play pieces for superhero and DC Comic fans. If you’d like to skip the games and simply enjoy the creative aspect by constructing your pieces for display purposes only, then you’ll be pleased to see that we have included some impressive-looking features below.

Gotham City Cycle Chase 76053 is a classic DC Comics set and not only does it feature Batman, but it includes the super-villains from the ever-popular Suicide Squad too. The fearfully cute Harley Quinn and Deadshot are in for the race and with the inclusion of these two minifigurines, the set is well worth the purchase (they’re pretty hard to come by). Both the Batcycle and Harley Quinn’s bike are pretty impressive additions to the set too. Boasting large rotating tyres and detailed almost to the tee with the original vehicle composition, enjoyhigh-speed chases through the streets of Gotham as Harley tries to knock Batman off of his bike with her novel hammer and defeat the forces of good. We all know Batman will win! Be sure to also check out our Lego Star War sets review for more great items like this.

Take on the Joker and wipe the mischievous grin off his face as you join forces with Batman to rid the world from this evil mastermind’s playful and criminal antics. Featuring a power plant with a silo, a Batman figurine as well as The Joker fully equipped with his balloon backpack, The Joker Balloon Escape 70900 is one of the more interactive Lego Batman movie sets. Taken from a scene at Gotham City’s Energy Facility, disassemble the bomb and then intercept the Joker before he escapes with his balloon jetpack (which includes awesome translucent flames). With fewer pieces and less challenging to build, this Lego Batman toy is more suitable for kids than for adult display purposes. Don’t forget to also check our review of the best Lego Jurassic World Sets for more great products like this.

Scarecrow Fearful Face-Off 70913 is one of the new Lego Batman toysavailable and it keeps to a smaller size, even though the play opportunities are huge! Team up with the heroic Batman and stop the infamous Scarecrow from spreading fear and turmoil in his wake. This box set come fully equipped with the pieces and features required to face an action-packed battle, but the novelty item that seals the deal is the Scarecrow’s Gyro-copter which boasts spinning rotors, an adjustable rudder, two bomb-drop functions, and three green gas-bomb elements. One lacking element that might disappoint some, is Batman’s popular utility belt which seems to be missing from the included minifigurine. If you are specifically looking to add the Scarecrow to your collection, then this set is well worth the purchase. Our handy guide to the top Lego robots features more great products like this.

Comes with the two featured minifigurines; Batman and Scarecrow

Best suited for ages 6 to 12 years

This is an ultimate collection piece for any serious Batman fan. In fact, the Batmobile is probably the most popular of all Lego Batman sets. Every nook and cranny of this crime-fighting vehicle is equipped with the finest of details and together with the wheels, this model can be built in a variety of ways, all depending on the mission at hand. And what would the Batmobile be without space for Batman’s trusted sidekick, Robin! This super cool Lego Batman car is not only extremely versatile, but it comes with a good number of added features and accessories which includes stud shooters, posable batwings and evil super-villainminifigurines – to name but a few. Speed through the streets of Gotham City while eradicating crime and saving the people from evil masterminds. If your kid likes to build toys, then one of the amazing magnetic toys would be a great choice.

The set includes the following minifigurines: Batman, Robin, Man-Bat and the Kabuki Twins

Completely compatible with all other LEGO building sets

Best suited for ages 8 to 12 years

Featuring two battle-crafts, the Joker’s helicopter and the popular Batwing, take your battle to the skies and fight the revengeful Joker before he releases toxic laughing gas over the city of Gotham. A featured hanging ladder can be found on the enemy helicopter which holds the smiling villain, just waiting for Batman to swoop down with his sleek Batwing and put an end to his evil plan! Complete with flick missiles and releasable gas bombs, the two aircrafts are a force to be reckoned with and will provide hours of adventurous fun. Love Lego? Check out our Lego sets for adults guide for more amazing Lego toys.

This set comes with three minifigurines which include Batman, the Joker, and the Joker’s Henchman

Best suited for ages 7 to 14 years

Without superpowers to come to his aid and defence, Batman needs to rely on a good variety of gadgets, weaponry and transportation to win the battle against evil powers. One such super-vehicle that’s always up for a bumpy ride is the Bat buggy. The Bat-Dune Buggy 70918 is one of the new Lego Batman toys on the market and it’s already proved itself to be quite the popular addition. Built for off-road use and to tackle bumpy roads, the Bat dune-buggy is equipped with everything it needs to live up to the chase and the demands of the battlefield. The Batman minifigurine fits accurately into the cockpit and the rotating wheels include suspension, which means the vehicle can bounce up and down as though it’s tackling real dessert dunes. You may also like to check our Marvel Lego Sets review, for more great toys slike this.

The Batwing makes another appearance in the Lego world, this time the heroic pilot and his feminine sidekick, Batgirl, are ready to defeat the Joker and his grinning steamroller as it rampages through the streets of Gotham city. While the steamroller is an impressive weapon that boasts a rotating roller, laughing gas bombs and one of the Jokers goons as a driver, it’s no match for the heavy armed Batwing that’s detailed to the tee with flick missiles and fighter wings which are well-equipped for the attack! Featuring as one of the bulkier best Lego Batman sets, The Joker Steam Roller encourages hours of creative fun and is a perfect addition to other sets in the series. Find more great lego options by checking out our list of Lego Technic sets.

Includes 5 minifigures and their weapons. The characters include: Batman, Batgirl, Robin, The Joker and Joker goon

Both vehicles come with movable parts and flick missiles

Best suited for ages 7 to 14 years

Zoom into orbit and help Space Batman retrieve Green Lantern’s lantern which has landed in the evil hands of the infamous Sinestro! While the minifigurines are something to boast about, the feature of Green Lantern vs. Sinestro set is Green Lantern’s super-fast spacecraft that comes designed with spring-loaded shooters and a cockpit that can comfortably seat the superhero pilot. Another classic piece to this set is the accompanying cage that Sinestro keeps the Lantern in, thinking he’s outsmarting his attackers – but come on, no one outsmarts Batman and the Green Lantern! Like all Lego Batman sets, the models are compatible with each other, which allows your imagination and creativity to add to each scene.

Best suited for ages 6 to 12 years

This time we’re battling Mr. Freeze and his awesomely posable Exo suite! If you’re looking to add this “cool” guy to your collection, then purchasing the Mr. Freeze Ice Attack model is pretty much your best option. Rescue the security guard from the ice prison and defend Gotham City and its energy facility from the evil ice supervillain. This set comes prepared for action and includes a transparent ice prison, a sweet stud-shooting freeze gun and a power plant complete with its own novelties. The featured part is definitely the Exo suite however. Standing 11 centimetres tall, this weapon clad suite includes movable parts and allows the Mr. Freeze minifugure to clip in and out with ease. If you need a gift idea for your kid, check out our cool educational toys review.

Comes complete with three minifigurines including Batman, a medium blue Mr. Freeze, and a security guard

Certainly one of the most colourful of all Lego Batman sets, The Joker Notorious Lowrider 70906 includes both Batman and Batgirl as they work together to defeat the crime-loving and mischievous villains; Harley Quinn and The Joker. These classic minifigurines accompany the Joker’s low rider and custom-designed vehicle, which certainly is an extension of the evil clown’s quirky personality! The lowrider comes complete with wheel suspension and a trunk that opens up to reveal hidden translucent green double spring-loaded shooters. While this model is featured last as one of the best Lego Batman sets, it’s one of the kits that boasts a more popular collection of mini-characters and accessories. It also contains more pieces if you are looking for a challenging set to put together. Don’t forget to also check our nerf guns guide for more great toys.

Four minifigurines are included with this package: Batman, Batgirls, Harley Quinn and The Joker

Best suited for ages 8 to 14 years