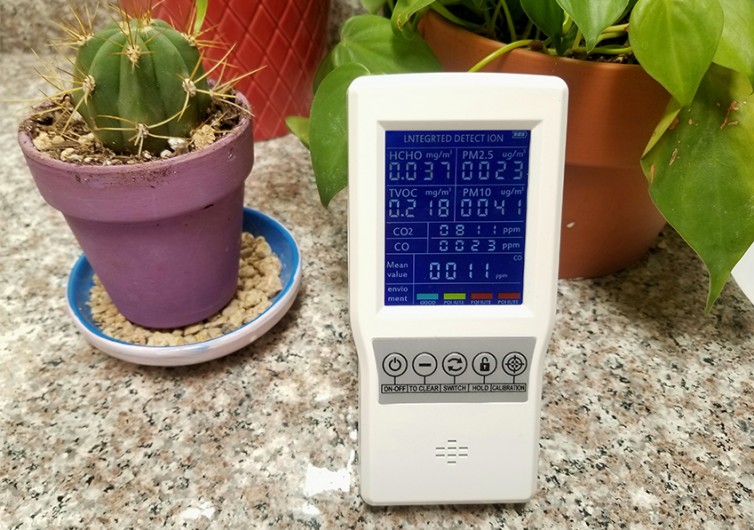 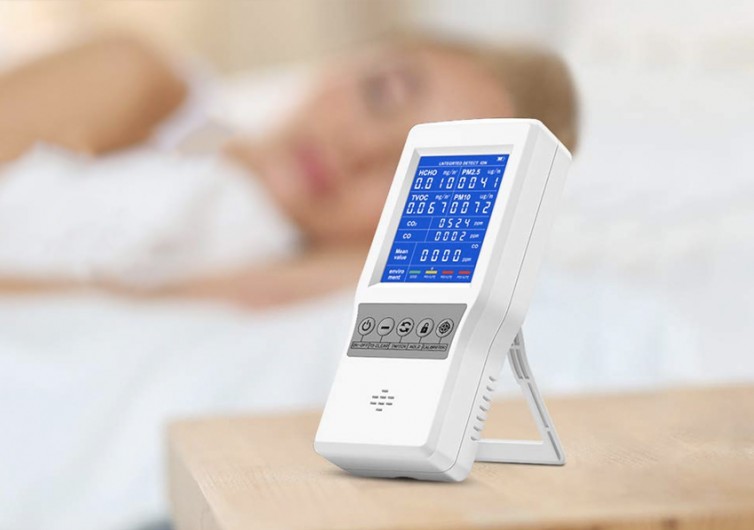 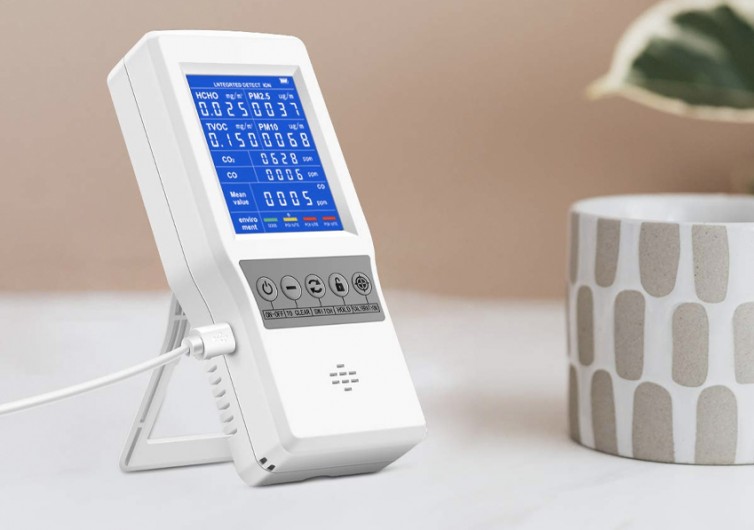 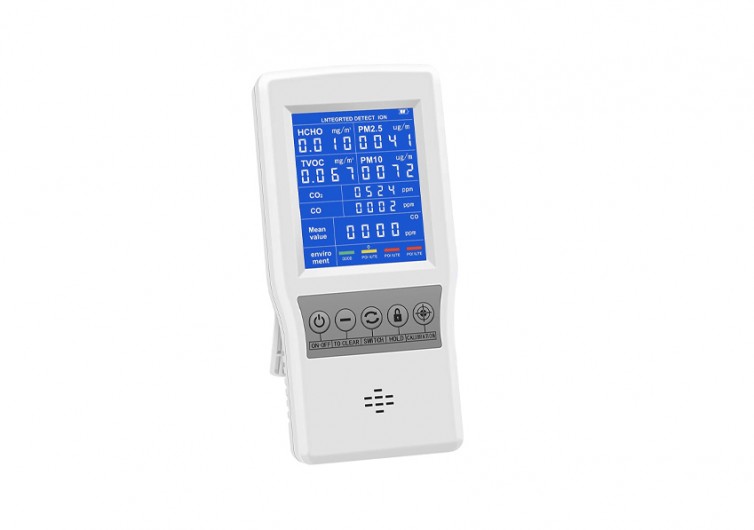 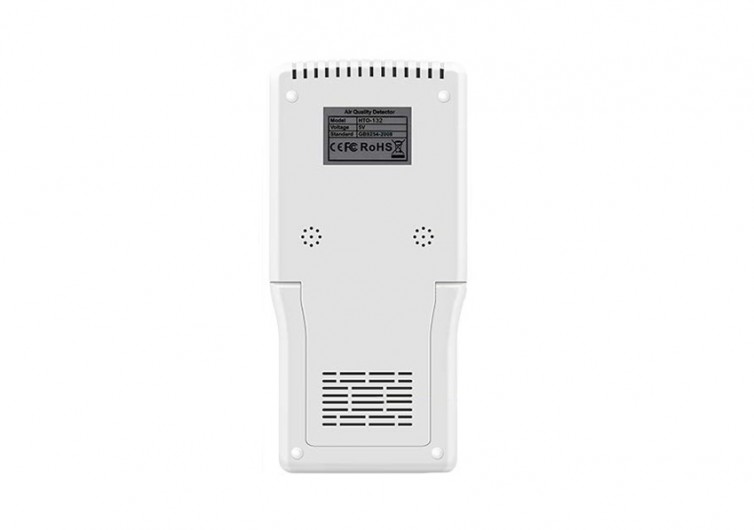 By Sam Anderson
Last Updated April 6, 2021
Sam Anderson
Sam Anderson has followed a passion for well-told stories and nature's beauty from university classrooms to mountain adventures. After earning a bachelor's degree in literature, he leaned into a life fueled by road tripping, rock climbing, coffee and beer, and renegade camping. He has worked as a chainsaw operator, house carpenter, and window cleaner, at one point running his own window cleaning business. He has finally settled with his girlfriend and small zoo in the western American desert, trading his tool belt for a keyboard.
Learn about The Gearhungry's Editorial Process
GearHungry may earn a small commission from affiliate links in this article. Learn more

HYVQDNM’s $96 air quality monitor is a straightforward appliance that delivers basic air quality data. The compact unit scans for six common household air pollutants and displays the level of each on an easy-to-read LCD screen. The monitor neither stores information nor connects to an app — it simply reads and displays data, refreshing every second or so.

During testing, the HYVQDNM showed consistent enough results to satisfy me, and it correctly indicated air that was obviously polluted.

Using the HYVQDNM air quality monitor is a lot easier than repeatedly typing its apparently random seven-letter brand name. It measures six different pollutants: Formaldehyde (or HCHO), total volatile organic compounds (TVOC), carbon monoxide and dioxide (CO and CO2), and various dust, spore, and pollen micro–particles (PM2.5 and PM10). It does not read radon, which will be acceptable to some.

With the data it receives, it generates a “mean value,” expressed in ppm, and indicates the level of air pollution as green (good), yellow, red (less severe), or red (more severe).

The instruction booklet explains each pollutant further, with occasionally amusing broken English. Example: “Fine particles are also called fine particles, fine particles, PM2.5.” Suffice it to say, you’ll have to do some work on your own if you really want to know more about these common household air pollutants.

But I digress. Take the HYVQDNM air quality monitor out of the box, push the power button, and it’s ready to go. Because it has no connectivity features, it requires no further setup. You will have to wait for it to calibrate — within 30 seconds, mine showed a CO2 reading of 9000+ on my desk, which maxed out the digits on the unit’s screen and triggered the red indicator for most severe pollution.

Of course, this wasn’t accurate. By evening, the red-light readings had cooled down, and the indicator pointed to green.

After it functioned operably for a few days on my desk, I moved the HYVQDNM around my apartment to test its efficacy. It didn’t raise my eyebrows nor display any massive changes anywhere except in the most unsurprisingly polluted areas.

The HYVQDNM only claims to work indoors, so I tested it in three places after moving it from my office: first in my living room, then near some house plants in the kitchen, and finally on top of my cat’s litter box, which is — sometimes regrettably — right next to the toilet.

Readings were totally unremarkable in the living room and near the plants, with one exception — the monitor read high CO2 near the house plants. I thought this was incongruous until I considered that the monitor could be reading the CO2 that the plants were drawing toward themselves.

I knew the cat box would be the true test. I put the monitor right on top of the lidded apparatus, closed the door of the tiny bathroom for an hour or so (at no harm to my feline friend). When I checked back, sure enough, TVOC (total volatile organic compounds) and HCHO (naturally occurring formaldehyde) levels were through the roof.

My HYVQDNM experiment was not perfect because I had no additional testing equipment or control group. The most direct test, breathing into the sensor, did raise CO2 levels, but I didn’t have another monitor to test the unit against. The lack of a comparable setup was partially due to setup duration: other monitors have set-up periods up to a week, where the HYVQDNM takes just minutes.

Still, I considered the HYVQDNM air quality monitor a simplistic, helpful tool for tracking everyday pollutants around the house. I’m curious to see what it reads during wildfire season when smoke sometimes gathers and stagnates outside (and in) my apartment in the Las Vegas valley.

At an MSRP of $96, it’s a useful tool that’s simple enough for your grandparents or kids.

Chill Out With The Best Portable Air Conditioners In 2022

by GearHungry Staff
Last updated: April 28, 2020
Sign Up Now
GET THE VERY BEST OF GEARHUNGRY STRAIGHT TO YOUR INBOX